Skip to main content
This is documentation for Kotest 5.2, which is no longer actively maintained.
For up-to-date documentation, see the latest version (5.5).
Version: 5.2

The Kotest team is pleased to announce the release of Kotest 4.1.0. This minor feature release is packed with goodies including the first public release of the Intellij plugin. In this blog post we'll cover some of the more notable features and changes but for the full list see the changelog.

Let's start with the most exciting news. As part of the 4.1.0 release cycle, we've released the first public version of the Kotest plugin for Intellij. The plugin is available in the Jetbrains plugin repository, so hop on over to settings -> plugins and search for "kotest".

As this is the first release that will be used by the majority of users, bugs will likely be found. If you do encounter an issue, please open a ticket here.

The tool window will include lifecycle callback methods (such as before / after test) if defined, as well as included test factories.

Clicking on a spec, test, include or callback will navigate directly to that element in the source editor. 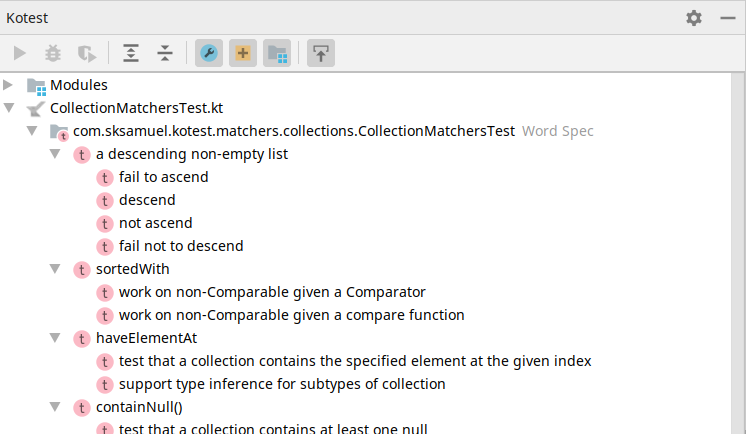 For full details on the features provided by the plugin, check out the readme.

Note: In order to support this plugin, the behind the scenes code that fooled Intellij into thinking Kotest specs were Junit tests has been removed. This means that unless you have the plugin installed, you won't see the green play icon anymore on the class name.

With release 4.0 of Kotest, the project was renamed from Kotlintest. To aid migration, we created aliases from the kotlintest packages to the kotest packages for common imports.

With the release of 4.1 these aliases have been removed.

When comparing two data classes for equality, previously you had to look through the fields to see which one(s) didn't match up. Instead now, the failure output will highlight the differences for you.

For example, given the following data class:

And then executing this:

Will give the following output:

Test containers is a popular Java library that supports lightweight, throwaway instances of databases, message queues, elasticsearch and so on. And now Kotest has a module that allows easy integration into the test lifecycle.

Add the kotest-extensions-testcontainers module to your build and then you can register a test container like this:

Notice the .perTest() function which creates a listener that will stop and start the container between tests. If you want a container that only starts and stops once per spec, then use the following:

The popular javascript frameworks and RSpec in Ruby have popularized the describe / it layout style for tests. Kotest has supported this since version 1.0 in the form of the DescribeSpec. These other frameworks also provide an easy way to disable a test, by replacing describe with xdescribe and it with xit. Kotest also supports this.

Starting with 4.1 Kotest now rolled out the same functionality to the other styles. For example, you can disable a given block in BehaviorSpec by using xgiven, you can describe a context block in FunSpec with xcontext and so on.

A full example in the FunSpec style.

Following on from the previous section, when you use certain specs, the test names are prefixed with Describe:, or Feature: and so on in the output.

This adds extra noise to the output and in retrospect should not have been added. Starting with 4.1 you can now disable these test prefixes by setting includeTestScopePrefixes to false in your project config.

Kotest has the option to apply a timeout to your tests through config on the test case.

Kotest has for a long time, had the ability to run specs in parallel. Starting with 4.1 you can run individual test cases in parallel. Override the threads val inside your spec class to greater than 1. Note: This feature is experimental and only applies to the single instance isolation mode.

All scopes are now coroutine scopes​

Leaf test cases have always been coroutine scopes since release 3.2 of Ko(tlin)Test. This means you can launch a coroutine directly in the test block without needing to provide a scope like GlobalScope or your own instance of CoroutineScope.

Previously, parent scopes in test styles that allow nesting, were not themselves coroutine scopes. This has been changed in 4.1.

Another feature that was more an oversight than anything else - the beforeProject and afterProject callbacks inside ProjectListener are now suspendable functions.

You might already be using assertSoftly to allow a test to finish before throwing all the failures at once. Now you can do the same but with a receiver.

For example, rather than write

You can now do:

For example, given a silly test that checks that any string reversed is the same as the input string:

This will be true for the empty string and all single char strings, and then false for most other strings.

The forAll and checkAll property test functions accept a PropTestConfig object to configure a property test. This object now contains a listeners field, to which you can attach PropTestListener instances. This allows you to run setup / teardown code before and after a property test, like you can for regular tests.

Huge thanks to all who contributed to this release.